Istanbul is colorful. Its mixture of culture, people, history, religions, and traditions often become the subject of many photos taken by both amateur and professional photographers.

There is one man, who has notably become the most famous photographer in the country purely because of the city. He is called Ara Guler and his nickname is “The Eye of Istanbul”. 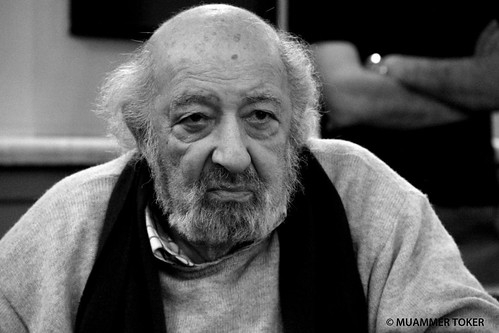 Who is Ara Guler?

He is a native of Istanbul who was born to Armenian parents in Istanbul five years after the formation of the Turkish republic. At first, his chosen career path was in movies and he attended numerous drama classes.

Perhaps not feeling passion for the cinema, he moved sideways into journalism. This was the beginning of his photography career and over the years, he won numerous awards, was accepted to the most elite photography membership clubs, and started to exhibit his work.

He has taken thousands of photographs all over the world but his claim to fame stems from the pictures he took of Istanbul during 1940 to 1980.

Nowadays, Ara Guler is 81 years old. He owns a café in the Galatasaray district of Istanbul. On the walls of his café are some of his most famous and impressive photographs.

What is special about his photographs of Istanbul?

Rather than calling himself a professional photographer, Ara Guler said he was a “visual historian”. His street photos of Istanbul focused on the people and daily life, ranging from men sitting outside a tea café to the fish sellers down at the docks.

Taken in black and white, his use of lights and perspective were new techniques in the field of photography. Some have described him as a storyteller, pointing out the ability of his photos to provoke emotion and curiosity in anyone that sees them.

None of the photos are posed. They were all taken in the moment, when the subjects were expressing their vulnerabilities and true perception of life.

To truly understand Istanbul and appreciate the inner workings of this cultural city, I strongly advise you view the work of Ara Guler on his official website.  Alternatively, you can also purchase his book on Amazon

“When I’m taking a picture of Aya Sofia, what counts is the person passing by who stands for life”

“Istanbul became my subject because I was born here, grew up here and I know this place intimately.”

“A photographic record of daily life in Istanbul from the 1940s to the 1980s. It shows the city’s melancholy aesthetic as it oscillates between tradition and modernity.”

Enjoy a relaxed pace and time to take the photos of Istanbul that you want to. On this walking tour, you will explore the local neighbourhoods of Istanbul including Galata and Cihangir. Learn more…