Antalya was founded by Attalos II, King of Pergamon, in 150 bce, but the ancient sites remaining in the city date from  Antaya’s Roman period. The most famous ancient landmark of the city is Hadrian’s Gate, built by the Roman emperor in the 2d century.

These imposing triple arches mark the entrance to Kaleici, Antalya’s old city. The architecture in Kaleici is predominantly from the Ottoman period, but the walls surrounding the old city date from Roman times.

Also in the old center are the remains of the Korkut Mosque. This structure was originally built as a Roman temple in the 2nd century, but was later converted to a Byzantine church, a Seljuk mosque, a church during the crusades and finally an Ottoman mosque.

Along the city wall stands the Hidirlik Tower, and ancient fortification looking over Kaleici’s harbor. 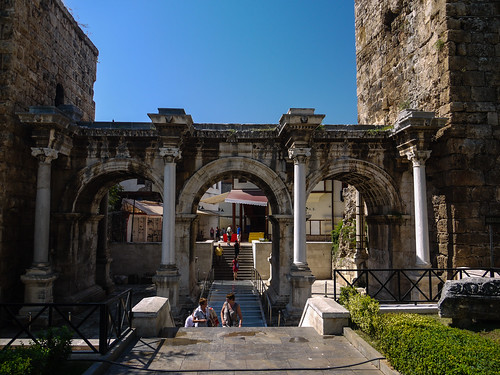 Anyone interested in history or archaeology must visit this museum.  It has impressive collections of arts and artefacts dating back five thousand years.  Many of the statues found in excavations in the region are housed in this museum.

For the athletic explorer, Termessos makes a great day trip. Less than half an hour from Antalya’s center lie the remains of this ancient city on a mountaintop.  Alexander the Great found it impenetrable, but with a good pair of hiking boots you can climb the rocky terrain and be rewarded by the magnificent sight of a theater built into the mountain. 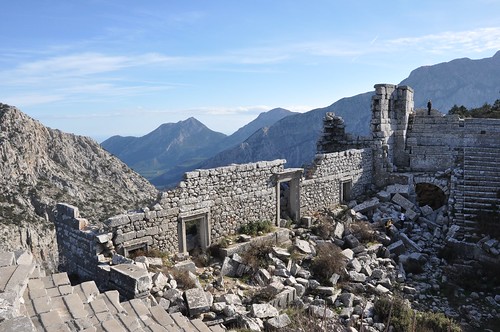 One of the most popular day trips from the city of Antalya is a visit to Aspendos and Perge.  Aspendos has one of the best preserved theaters of the ancient world, a theater still in use for summer opera performances.  Perge has some of the most extensive remains in the region, and unlike Termessos, is flat and easily walk able.

If you prefer to combine ancient ruins with beautiful beaches, there are several options as well:

Situated on three contiguous bays, Phaselis was a port city of the Roman Empire. Ancient ruins of the aqueduct  and the theater, as well as remains of the city, are on view in what is now a national park. The seclusion of the site keeps it clean and quiet. But pack a lunch – there are no cafes or restaurants on this beach.

If you like your ruins combined with a seaside resort, Side is your destination.  Side’s sand beach is lined with cafes, but right next to this modern development lie the remains of an ancient city.  The large main gate and the Temple of Athena, date from the Hellenistic period. The Temple’s marble columns, towering over the sea, are in the Corinthian style.

Less touristy than Side, but providing more services than Phaselis, are Olympos and Cirali, whose beaches are adjacent, are popular spots for day or weekend trips. Built during the Hellenistic period, parts of Olympos’ theater can still be seen. There are also remains of the Roman bathhouse and a Byzantine Church. The necropolis has more than two hundred inscribed tombs.

Three kilometers north of Cirali is the site of the Chimaera, the Eternal Flame.  Consisting  of  over twenty vents in the ground on the hillside above the Temple of Hephaistos, the Chimaera emits methane, which can spontaneously ignite. Sailors in ancient times could navigate by the flames, but today the fire is used primarily to brew tea.

Additional sites include the sunken city of Kekova, the tombs of Myra and the birthplace of St. Nicholas.

See all that the region of Antalya offers on our guided, group and private tours. Explore the historical sites and learn about multiple generations of empires in this area throughout history. Find out more…