In Turkey, there are many opportunities to introduce your palette to new and exciting tastes. The cuisine is widely praised around the world for its diversity and one culinary item to try is traditional Turkish ice cream.  The taste is very different compared to commercially produced ice cream either in Turkey or in western countries. 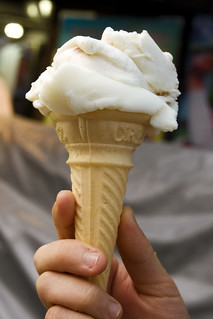 Traditional Turkish ice cream is chewy, thick and has an elastic texture. This result stems from two of the main ingredients that are a thickening agent called salep and a resin called mastic.

It also has a marvellous resistance to melting and on hot summer days, it is consumed slowly without a fear of it dribbling down the cone.

Such is the consistency; do not be surprised to see a Turk eating his ice cream with a knife and fork.

In 2003, scientists warned the Turkish government that the popularity of ice-cream made with salep was threatening the existence of the  orchid flower producing the ingredient.

Grown in the south-eastern mountains of Turkey, the Turkish government hastily slapped a ban on exporting the product however; traditional Turkish ice cream is more popular now than it ever has been before.

The region of Kahramanmaraş is often referred to as the capital of ice cream in Turkey. Also known as Maraş, Turks say the best icecream is “Maraş dondurma”.

Particularly in Istanbul, traditional Maraş ice cream is sold from street vendors carts. The salesmen wear regional dress costumes from the Kahramanmaraş area and depending on their mood, it may be a while before you can sample the chewy and tasty ice cream.

Have a look at this video and you will see just how elastic Turkish ice cream is and you are also forewarned if you plan to sample traditional ice cream in Turkey!

See magnificent sites and life for the locals of Istanbul on our wide range of tours. From private to group to guided tours, we help you to see the best of what the city offers. Learn more…