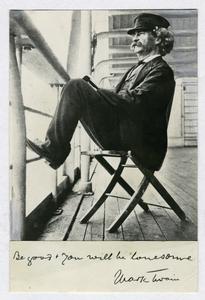 Travel books are popular for one very good reason. They help the reader. Most aim to improve the readers travel experience by giving hints and tips on any specific area such as beaches, countries, adventure sports or understanding culture and traditions.

One travel book though has outweighed all others in popularity, and it is 146 years old. Its author is the celebrated and world-famous writer, Mark Twain.

Along with friends, he left America in 1867 on a ship called the USS Quaker city. The trip was an extensive journey through many countries including Turkey.

Mark Twain brilliantly conveys to the reader what he saw and experienced.  His interaction with locals and opinions of famous historic buildings enable the reader to conjure up images of this proud nation in the Ottoman Empire.

Although this travel book is not relevant to today’s tourism market in Turkey, hard-core fans or expats will appreciate the read, while those thinking of coming to Turkey should steadily remember that 146 years have passed since this book was published.

He went to the large and bustling city before it took the name of Istanbul.

His ship dropped anchor in the Golden Horn and his first impressions were of a picturesque destination but he soon changed his mind once he left the ship to come on land.

He says of the dress style for men…

“The men were dressed in all the outrageous, outlandish, idolatrous, extravagant, thunder-and-lightning costumes that ever a tailor with the delirium tremens and seven devils could conceive of.

There was no freak in dress too crazy to be indulged in; no absurdity too absurd to be tolerated; no frenzy in ragged diabolism too fantastic to be attempted.

No two men were dressed alike. It was a wild masquerade of all imaginable costumes–every struggling throng in every street was a dissolving view of stunning contrasts.

Some patriarchs wore awful turbans, but the grand mass of the infidel horde wore the fiery red skull-cap they call a fez. All the remainder of the raiment they indulged in was utterly indescribable.”

After exploring small and cramped shops, he watched in amazement at the skills of a crafty goose seller.

He also expressed great disbelief as countless amounts of cripples and beggars made their way around the narrow streets.

“I do not think much of the Mosque of St. Sophia. I suppose I lack appreciation. We will let it go at that. It is the rustiest old barn in heathendom.

I believe all the interest that attaches to it comes from the fact that it was built for a Christian church and then turned into a mosque, without much alteration, by the Mohammedan conquerors of the land”

A visit to the historic Grand bazaar did nothing to improve his mood as he describes it as “a monstrous hive of little shops”.

Chapter  XXXIV then opens with a graphic description of when religion comes up against morals.

The Koran does not permit Mohammedans to drink. Their natural instincts do not permit them to be moral.

They say the Sultan has eight hundred wives. This almost amounts to bigamy.

It makes our cheeks burn with shame to see such a thing permitted here in Turkey.

We do not mind it so much in Salt Lake, however”.

Mark Twain continues to further criticise the city for its private slave markets, abundance of flee ridden street dogs, lack of hygiene when serving food and the bad commercial morals of merchants and salespeople.

“Every body lies and cheats–every body who is in business, at any rate. Even foreigners soon have to come down to the custom of the country, and they do not buy and sell long in Constantinople till they lie and cheat like a Greek.” One experience that he was optimistic about was a Turkish bath, yet he thought the travel books of his era had grossly over exaggerated the process.

After expressing his disappointment, the next topic to fall to his criticism was Turkish coffee.

“Then he brought the world-renowned Turkish coffee that poets have sung so rapturously for many generations, and I seized upon it as the last hope that was left of my old dreams of Eastern luxury.

It was another fraud. Of all the unchristian beverages that ever passed my lips, Turkish coffee is the worst”.

By this end of this chapter, it is easy for the reader to assume that Mark Twain will never set foot in the Ottoman Empire again.

Yet he left Constantinople to travel to Russia then returned briefly before heading down the coastline to Smyrna (present day Izmir ) and the great ruins of Ephesus.

This impressed him more than the great capital of the sultan rulers.

“But for the crumbling arches and monstrous piers and broken walls that rise from the foot of the hill of Pion, one could not believe that in this place once stood a city whose renown is older than tradition itself”.

It was a wonderful city, this Ephesus.

Go where you will about these broad plains, you find the most exquisitely sculptured marble fragments scattered thick among the dust and weeds; and protruding from the ground, or lying prone upon it, are beautiful fluted columns of porphyry and all precious marbles; and at every step you find elegantly carved capitals and massive bases, and polished tablets engraved with Greek inscriptions.

It is a world of precious relics, a wilderness of marred and mutilated gems. And yet what are these things to the wonders that lie buried here under the ground?”

After visiting the cave of the seven sleepers, his journey in Turkey abruptly finishes as he ends that chapter and starts the next with an introduction to Syria.

The chapters of Mark Twain’s travels through Turkey are brief and  he neglected other parts of the country now popular with tourists including Antalya, Cappadocia and the black sea regions.

Nonetheless, it is still an interesting read for anyone who has a connection or interest in Turkey.

Images are original and supplied by the Gutenberg Organisation

Chapter XXXIII – Arriving in Istanbul : Cripples, the Hagia Sophia and the Grand Bazaar

Follow in the footsteps of Mark Twain by touring all the major highlights of Turkey. From Istanbul to Ephesus to Cappadocia. Find out more…